Malignant aneurysmal subarachnoid hemorrhage (aSAH) is associated with high patient mortality. Despite recent advances in management strategies, the prognosis of low-grade aSAH remains dismal. We present a difficult case of a patient presenting with low-grade aSAH. A 46-year-old woman presented to the emergency department after she lost consciousness following a sudden headache. Her examination showed her dilated left pupil and her Glasgow Coma Scale of 4. Imaging revealed a ruptured anterior communicating artery (ACoM) aneurysm, after which the patient was referred to the department of neurointerventional radiology. We have shown that careful control of blood pressure and intracranial pressure (ICP) can reduce the risk of brain injury secondary to aSAH and achieve a favorable outcome, regardless of the patient’s symptoms. Prior to intervention she is advised to maintain blood pressure below 160 mmHg. She can then be raised to 160-240 mmHg to prevent vasospasm. In addition, the subtle symptoms of patients with aSAH make transcranial Doppler (TCD) essential for detecting vasospasm. Once identified, vasospasm can be successfully treated with balloon angioplasty. Finally, target temperature management (TTM), mannitol, hypertonic saline, and neuromuscular palsy are essential for postoperative management of ICP levels.

Aneurysmal subarachnoid hemorrhage (aSAH) arises from a ruptured intracranial aneurysm and has an estimated prevalence of approximately 70,000 cases annually in the United States. [1,2]Risk factors for aSAH include high blood pressure, smoking, and a family history of aSAH. [1,2]Symptoms of an aneurysm rupture include sudden and excruciating headache (“thunderclap”), loss of consciousness due to a sudden increase in intracranial pressure (ICP), seizures, nausea, vomiting, and decreased level of consciousness (LOC). . The prognosis of aSAH was historically graded on the Hunt Hess scale, but more recently the World Federation of Neurosurgeons (WFNS) grading scale has been utilized. Patients who are awake, have headaches, and have a relatively preserved LOC, such as a Glasgow Coma Scale (GCS) score >12, are usually designated as ‘benign’. [1-3]Prognosis for aSAH correlates with initial WFNS score, with an estimated survival rate of 65%. [1-4].

In the present study, the authors present a difficult case of a patient presenting with low-grade aSAH complicated by vasospasm and elevated ICP, who ultimately made a remarkable recovery. We also review the current literature on management strategies to reduce the risk of her four most common causes of secondary brain injury. Cerebral ischemia/vasospasm.

A 46-year-old woman lost consciousness following a sudden headache and was taken to the local emergency department. On her examination, her GCS was her 4 (extended), her left pupil was larger than her right, and her urine test for cocaine was positive.Computed tomography (CT) revealed a diffuse subarachnoid hemorrhage with intraventricular hemorrhage (Fig. 1). CT angiography revealed an anterior communicating artery (ACoM) aneurysm. She was given her 100 g mannitol and a nicardipine infusion was started so that her systolic target was below her 160 mmHg. 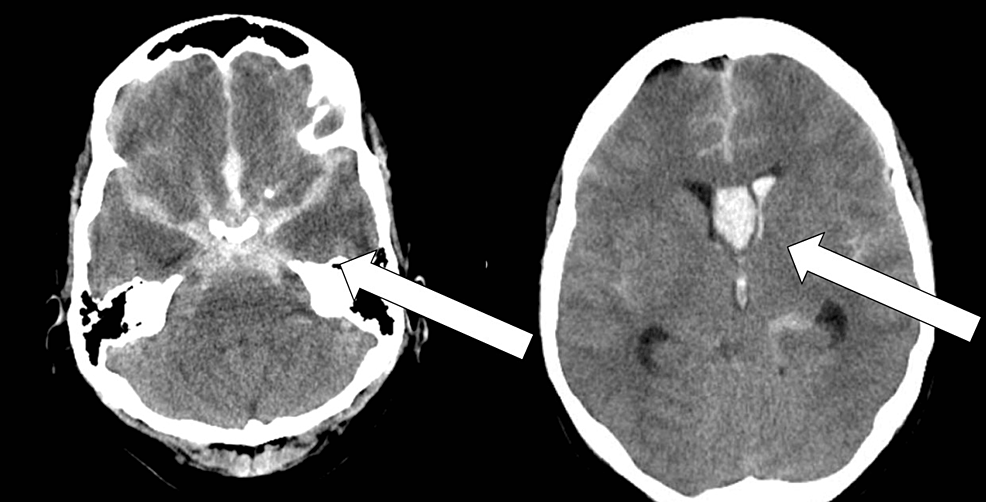 Upon arrival, she was taken directly to the Neurointerventional Radiology (NeuroIR) suite for possible aneurysm involvement. In addition, emergency placement of an external ventricular drain (EVD) was performed that detected her ICP above 20 mmHg.The aneurysm was then successfully coiled (Fig. 2). Postoperatively, the patient was admitted to the neurological intensive care unit for further monitoring as his clinical symptoms continued to abate. A target sodium level of 145-155 mEq/L was achieved with saline infusion. This target level of sodium was implemented because of previous literature linking better outcomes in aSAH with the use of hypertonic saline. [5]Over the next few days, the patient remained comatose, but the ICP decreased to <20 mmHg and the patient's pupil became bilaterally symmetrical. 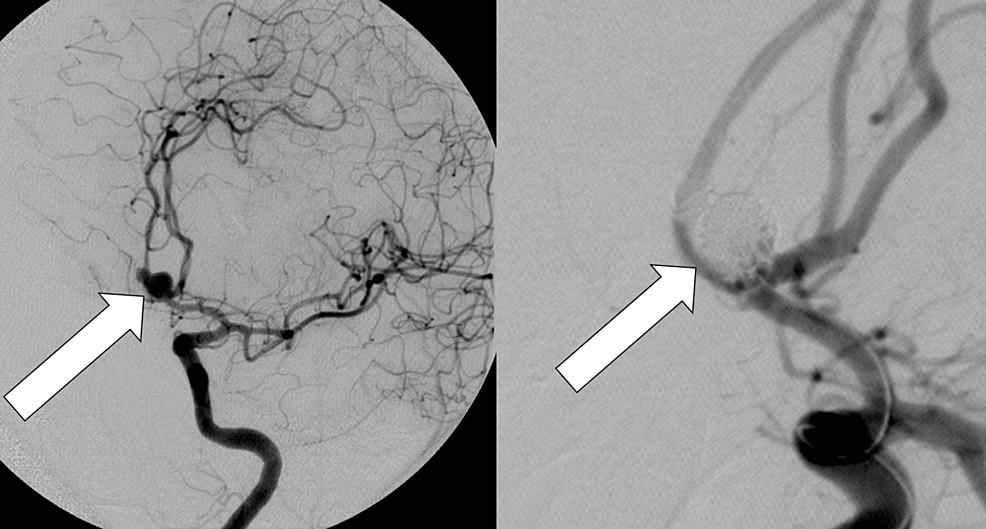 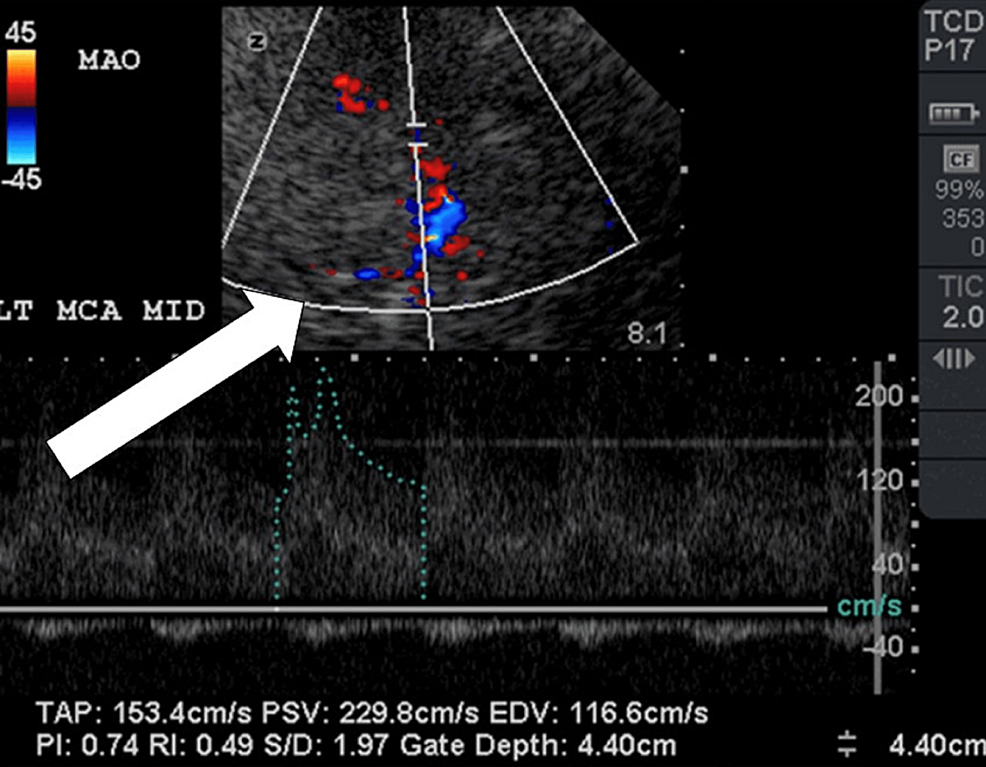 The patient was returned to the NeuroIR suite, which revealed diffuse severe basilar and proximal rings of Willis vasospasm (ACA-A1, MCA-M1; Fig. Four).

A chemical antispasmodic was administered, and because of the severity of the vasospasm, balloon angioplasty of these arteries was successfully performed twice on two consecutive days (Fig. Five). By POD 10, intermittent increases in ICP above 40 mmHg became more frequent despite the use of mannitol and hypertonic saline, and imaging showed global cerebral edema (GCE). This is her one drawback to setting a high target for initial sodium levels. This is because at a high ICP setting, it is not possible to use a high target range initially to further increase sodium levels. Therefore, the patient required target temperature management (TTM) with low-dose sedation, neuromuscular palsy, and mild to moderate hypothermia (32–34 °C) to control ICP below 20 mmHg.

shape
5: Balloon angioplasty performed for 2 consecutive days for vasospasm. Vasospasm of the basilar artery, A1 and A2 segments of the ACA, left M1 segment of the MCA (left). Basal brain balloon angioplasty results (right).

ICP and body temperature were fully normalized in Pod 24 (repeated attempts to normalize TTM and ICP with hypothermia for a total of 14 days). A few days later, the patient awoke from the coma and began to speak spontaneously. Her EVD was clamped and eventually removed. She was rapidly weaned from her ventilator and successfully transitioned to her rehabilitation. At her 3-month follow-up visit, she underwent a Mini-Mental Status Examination and a Neurological Examination with Translator, and her Modified Rankine Scale was 0 on her.

An international collaborative study on the timing of aneurysm surgery helped define mortality prognosis in patients with aSAH, including highlighting the role of early surgical timing in patient prognosis (<4 days vs. 4-14 days) [1-3]In the early stages of these studies, surgical intervention for patients with low-grade aSAH was generally postponed until neurological signs of recovery were shown. [3]Currently, with advances in both endovascular and open surgical techniques for treating aneurysms, surgical decisions depend on each patient's clinical presentation. [4]In addition to aneurysm size and location, systolic blood pressure above 160 mmHg may increase the risk of re-rupture of previously secured aneurysms. [6,7]Lowering the systolic blood pressure threshold to 140–160 mm Hg before intervention is important to prevent rebleeding, and setting a high threshold of 160–240 mm Hg after aneurysm fixation to prevent vasospasm. [8,9].

Early management of high ICP and cerebral perfusion pressure (CPP) in low-grade SAH is critical to achieve good outcomes. Absence of CPP (intracranial circulatory arrest) results in GCE, leading to impaired blood-brain barrier and impaired brain autoregulation [10,11]When higher doses are administered or blood flow is restored, more interstitial fluid leaks into the parenchyma (increased water in the brain, hence lower Hounsfield units). GCE is an ominous sign, and as a result CPP optimization is required while trying to keep ICP as low as possible. [10,12]Lund therapy [13] We also talk about optimizing intracranial Starling’s law with osmotic and hydrostatic pressure.

CSF diversion techniques such as EVD placement are commonly used in neurocritical settings for ICP control. For refractory high-grade ICP that does not respond to cerebrospinal fluid diversion, rudimentary assessment of head and neck location or tight bandages impeding jugular vein outflow should be performed. [14]Secondary ICP control can also be achieved with osmotic therapy using mannitol or hypertonic saline. [15,16]If ICP continues to fall despite maximal medical therapy, emergency surgical craniectomy/decompression should be considered. Targeted temperature management for hypothermia slows brain metabolism and lowers ICP. It has been shown to be effective in treating refractory ICP in SAH and traumatic brain injury, although it has not been shown to conclusively improve outcome. [9,17,18]Overall, more research is needed to fully establish evidence-based guidelines for appropriate ICP/CPP management for low-grade aSAH.

Although there is no consensus for low-grade aSAH, multimodal treatment regimens can be developed to achieve favorable patient outcomes. Regarding blood pressure control, we suggest maintaining blood pressure below 160 mmHg before the intervention and increasing it to 160–240 mmHg after the intervention to prevent the development of vasospasm. Furthermore, due to the subtle presentation of patients with aSAH, the use of TCD to detect vasospasm followed by treatment with balloon angioplasty was effective in treating vasospasm. Finally, postoperative treatment for fluctuating ICP levels was effectively managed with mannitol, hypertonic saline, TTM, and neuromuscular palsy.

Finally, we would like to offer the following as major highlights of this study: (ii) the use of rigorous, multifaceted medical management supported by the literature is essential for managing patients with aSAH and severe neuropathy; (iii) Variations in ICP and GCE were evident even with mannitol and saline. However, sedation and TTM returned ICP to <20 mmHg.

Despite the poor prognosis associated with clinical manifestations, the authors show that careful control of blood pressure and intracranial pressure can achieve favorable outcomes. The use of a multimodal approach should be considered when managing his low-grade aSAH. Further research on aSAH and efforts toward consensus in management will benefit patients with a poor prognosis. Consensus in management will help establish standardized treatment guidelines for this patient population.