Axon Enterprise, Inc (AAXN) is a market leader in non-lethal weapons, body cams and dash cams. And the company will continue to be a beneficiary of any future police reforms, particularly in the United States. Impressively, the company is successfully transitioning towards a more predictable subscription-based business model. Furthermore, the attractiveness of Axon’s subscription bundle is being boosted by continuous innovation and introduction of newer software offerings such as Axon Records. In this article, we review the evolving business model, the opportunity, growth trajectory, valuation and risks, and conclude with our opinion on investing.

Axon provides advanced technology solutions to law enforcement agencies. Its solutions include non-lethal weapons, body cams, dash cams, and software packages that improve law enforcement productivity and promote accountability. The company has consistently reported strong top- and bottom-line growth for the last few years, primarily driven by increased market penetration along with continuous improvement in its product portfolio. More recently, the unfortunate events in Minneapolis have led to a heightened focus on reforming policing in the US and that has provided further impetus to Axon’s core product categories of non-lethal weapons and body cameras.

Incorporated in 1993, Axon is the market leader in manufacturing and sale of non-lethal weapons in the US and has an effective monopoly in this product segment. The company has customer relationships with 17,000 out of the 18,000 enforcement agencies and is now leveraging its market leading position to grow penetration of its software and cloud businesses.

Taser Segment: This segment includes manufacturing and selling of Axon’s Conducted Energy Weapons (CEW) under the brand name “TASER”. The majority of sales in this segment consist of the newly launched cloud connect TASER 7 device and cartridges. The taser segment accounts for 52% of the company’s total revenue and had a gross margin of 62% in 2019.

Software and Sensors Segment: This segment includes products such as body-worn cameras, in-car dash cams and TASER cams. The segment also incorporates Axon’s fast-growing cloud-based evidence and record management platform called “Axon Cloud”. Out of the 69 largest metropolitan area police departments in the US, 46 use Axon’s software and sensors. The segment accounts for 48% of the company’s revenue and earned a gross margin of 53% in 2019. Axon cloud services generate a gross margin of 75% which is higher than any other business vertical of the company.

Geographically, 83% of the revenue comes from the US, whereas 17% is generated from other countries. While the majority of growth will be US-centric over the near future, international markets offer attractive long-term growth avenues.

The recent unfortunate events in Minneapolis and the subsequent nationwide protests in the US have resulted in growing calls for police reforms. Increased use of non-lethal weapons as well as body-worn cameras are being considered as a logical solution to improve police accountability and reduce the use of excessive force. Recently, New York Governor Andrew Cuomo passed legislation requiring all New York state police officers to wear body cams while patrolling. Axon being a market leader in both less-lethal weapons and body cameras is well-positioned to gain from this push towards police reforms.

“New York is the progressive capital of the nation, and we are leading the way by enacting real reforms to increase transparency in policing, promote accountability among our law enforcement agencies and ultimately mend that frayed relationship between the police and the community.”– Governor Cuomo, 16th June 2020.

Innovation leading to an increase in the company’s addressable market

Axon has consistently grown its addressable market through innovation and the introduction of newer and updated hardware as well as software platforms. As per the recent investor presentation, Axon’s total addressable market stands at $27 billion which includes untapped adjacent markets such as corrections and forestry department as well as the international expansion opportunity. Tasers account for $5 billion of the total addressable market, whereas Axon Fleet, which comprises of in-car hardware and software, contributes $3 billion. The biggest market opportunity of $13 billion comes from body cams and its cloud-based software solutions that include Axon Records and Evidence.com. Axon Evidence or Evidence.com allows enforcement agencies to store, manage and access data generated from devices such as body cams. It also allows live streaming through body cams and drone cameras to update on-ground staff. The company launched its record management system called Axon Records last year. Axon Records help in organizing and sorting case data to create meaningful reports for officers. Axon Records are integrated with Axon Evidence and therefore users can seamlessly get access to all the data stored in Axon networks. Axon Records has already been deployed at more than a dozen agencies and so far the reviews have been positive.

“Now that we are deploying Axon Records, we’re confident the system will incorporate everything we need for what is essentially the backbone of our agency.” – Police Chief Andrew Hall of Fresno PD

“We are seeing exceptional benefits with how body camera footage can be directly embedded in our use-of-force, officer accident, citizen complaint, and other internal reports.”-Police Chief Eliot Isaac of Cincinnati PD.

Please note that the software services offered by Axon are highly sticky in nature and once large amounts of data starts getting uploaded on the system and departments get used to Axon’s products, it is very costly and inefficient to shift to another vendor.

Axon has continued to shift its business from traditional taser and hardware revenue streams to a cloud-based subscription model with more visibility and higher margins. The bundled services provided by Axon range from $26 per month per officer to $229 per month per officer. Axon’s highest tier bundle, Officer safety plan 7+ includes the latest Taser 7 device, body cameras, and subscription to its cloud-based record and evidence management system. The net revenue retention of the software business stands at 120% which implies that the agency customers are not only retaining their subscriptions but are also upgrading their contracts to avail more tools. The 5-year revenue generation capability and simultaneous gross margins for each tier of service by Axon are listed below: 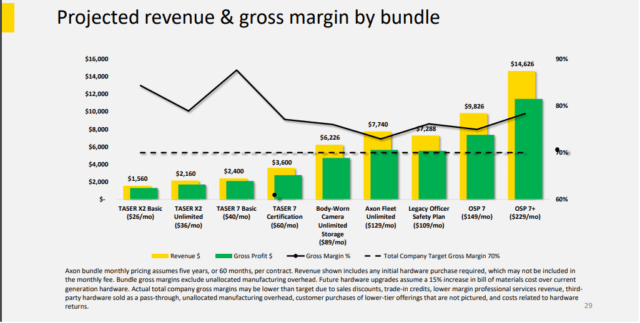 Additionally, the average contract length of five to ten years significantly reduces the annual churn rate and will allow Axon to generate steady and sticky cash flows in the future. The success of company’s subscription-based business model is evidenced by the company’s impressive growth in annual recurring revenue and number of software seats booked in the recent quarters. At the end of Q1 2020, the annual recurring revenue stood at $174 million which represents growth of 42% on a YoY basis. The future contracted revenue, which the company expects to recognize in the next five to seven years, increased from $930 million in Q1 2019 to $1.27 billion at the end of Q1 2020, YoY growth of 37%. 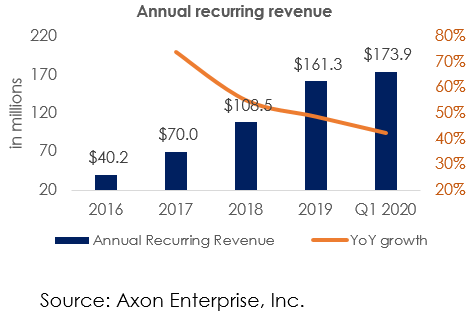 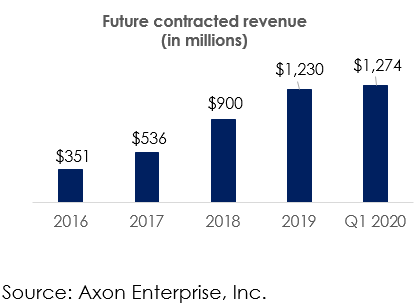 By the end of 2019, Axon had added over 465,200 users to its network which is an almost 35% increase from 2018. Seventy-one percent (+71%) of the annual revenue now comes from recurring subscription contracts as compared to just 34% in 2016. The larger share of subscription revenue adds to better visibility and predictability of future revenues. 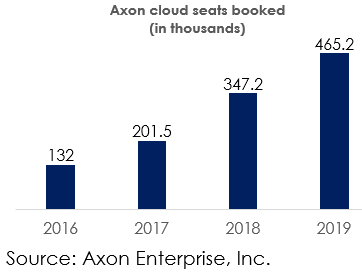 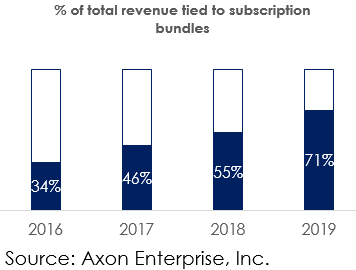 Revenue and margins moving in the right direction

In Q1 FY 20, Axon reported revenue of $147 million which represents a YoY growth of almost 27%. This increase was primarily driven by strength in the Software and Sensors segment which was up 41% YoY. Axon Cloud sales increased by 42% to $39 million, whereas the Taser segment sales grew by 16% to $76 million. Please note that Axon’s revenue has grown at a CAGR of 26% over the last 4 years. Although all the segments have contributed to the impressive growth in recent years, the software business has been a clear outperformer driven by strong demand and adoption of its cloud services. Growing at a CAGR of 63% in the last 4 years, the Axon Cloud segment, which contributed just 11% of the overall sales in 2016, now contributes ~25% of the revenue and continues to grow substantially.

On the profitability front, Axon generates a gross margin of around 60%. The gross margin of the Taser segment has declined after the launch of Taser 7 device because of its lower average selling price along with high per unit cost of manufacturing; however, this decline has been well compensated by growth in the Software segment which earns much higher margins of over 75%. Axon’s gross margins are expected to expand with the increased adoption of its subscription-based business model as management has targeted an average 70% gross margin for all subscription bundles offered by the company. 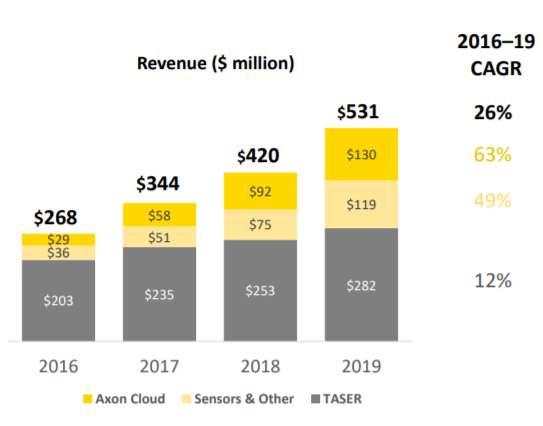 In Q1 2020, Axon reported an adjusted EBITDA of $30 million which represents a YoY increase of 115%. EBITDA margins also expanded from 12% in Q1 2019 to over 20%. Margins are expected to increase even further in the coming quarters as Axon generates leverage on its operating expenses on a larger revenue base and benefits from a positive mix shift to software. The company has a long-term EBITDA margin target of 30%. 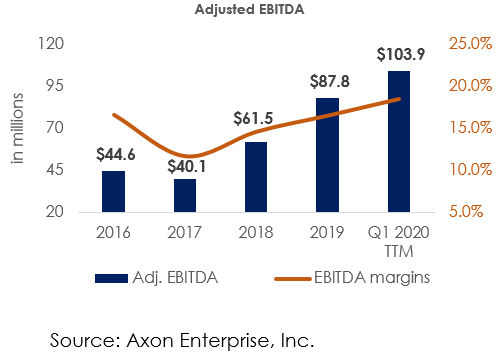 Axon is a free cash flow positive company. In Q1 2020, the company reported FCF of $6.5 million which is considerably higher as compared to -$19 million during the same period last year. The company has generated $75.2 million in FCF on a TTM basis. Please note that FCF has been consistently growing in recent years because of the strong growth in top-line and continued expansion of margins. Further, the company holds a robust liquidity position. Axon ended the quarter with zero debt on its balance sheet and available cash of over $380 million. Besides, the company is also in the process of raising $276 million through a public offering. 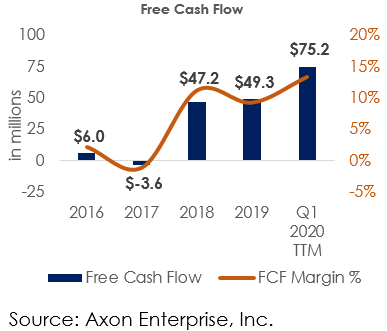 Axon’s stock has rallied considerably over the last few years as the business becomes more profitable and the growth outlook becomes brighter. Axon currently trades at a P/E ratio of over 78x and P/S ratio of over 10x. While the valuation is indeed at a premium, we believe the company’s solid market positioning, sticky consumer base, prospects for both above average revenue growth and margin expansion are attractive features. We continue to believe that the stock offers long-term oriented investors strong upside potential.

COVID-19: Although Axon operates in a less-cyclical market segment, it is not completely immune to prolonged economic slowdowns or recessions. During the period post the Global Financial Crisis of 2007-08, Axon sales significantly dropped because of budget constraints placed on law enforcement agencies. Although no such decline has yet been observed in Axon’s business during the current COVID-19 led economic slowdown, investors must track Axon’s order pipeline in the coming quarters. 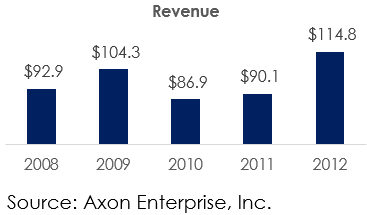 “Customers are relating to us that they’re facing large budget shortfalls and uncertainty in the macro environment unlike anything any of us who’ve ever seen. Currently our sales pipeline remains solid, but we cannot see over the horizon any better than the rest of you to know how the economy will shake out or if the federal government will step in to provide additional aid to state and local governments.” – Rick Smith, CEO in Q1 2020 earnings call.

Please note that the federal government as well as the Federal Reserve have been far more accommodative in the current crisis than even during the Global Financial Crisis. As such, they are likely to step in to plug any budget gaps during this crisis. Additionally, Axon derives a much bigger portion of its revenue from its subscription model with long-term contracts now and that will provide some cushion in the worst-case scenario.

Axon has delivered impressive top-line and bottom-line growth consistently for the past few years. After creating a near monopoly in the taser and body-cam market segments, Axon is now aggressively capturing opportunities to solidify its position in software/SaaS markets for law enforcement thereby increasing its addressable market and margin profile. Additionally, the business is transitioning to a more sticky, subscription-based model. For these reasons, we rank Axon as an honorable mention on our fortune makers list. And while Axon’s stock trades at a premium, we believe the premium is justified and there is still significant upside for long-term oriented investors.

2022 Year In Review – A Radical Change In Markets